Savoury and comforting vegan Swedish meatballs in a rich and creamy gravy sauce.

There is nothing better than a bowl of homemade meatballs and the most delicious sauce served over mash or pasta!

The base to these vegan meatballs are mushrooms and brown rice. The mushrooms add umami and flavour and the rice helps hold the meatballs together and adds texture!

My chief recipe taster for this recipe was my boyfriend who has been to Sweden many times and always enjoyed this dish.

He enjoyed this recipe with a side of lingonberry sauce, which I haven’t included in this recipe, purely because I’m not a fan of fruity condiments. But if you are and want this to be authentic I would recommend making or buying some!

Traditional swedish meatballs are made with pork and beef so to replicate the meaty flavour we are adding soy sauce, worcestershire sauce and liquid smoke.

You can find vegan Worcestershire sauce in some supermarkets or health food shops, or online. I use this one.

Just make sure you get a vegan one as it is usually made with anchovies, there are a few brands that do a vegan version.

How to make vegan Swedish meatballs and sauce:

For the rice, you can either make your own or use a microwaveable sachet (quicker option!). Once cooked, leave to cool.

Start by sauteeing the onion and mushrooms. Cook until the mushrooms are browned and they have evaporated the water they released.

Take off the heat and leave to cool. Place mushrooms and onion in a food processor along with the soy sauce, Worcestershire sauce and liquid smoke. Blend until mostly smooth like a paste.

Add the rice and blend again until the rice is mostly broken down. Make the flax egg by mixing flasxeed and water in a cup and leaving for a few minutes to thicken. This is going to help bind the meatballs.

Add the flax egg and all the remaining ingredients to the food processor and blend until combined. It should look pliable and easy to mould into balls.

Take a heaped teaspoon of the mixture and roll into a ball with your hands. Place on a plate and repeat until all the mixture has gone. It should make around 15-20 balls, depending how big you make them.

I would recommend making them on the smaller side so they go nice and crispy and coat in the sauce well.

Heat a thin layer of oil in a large frying pan on medium heat. Place the balls in the frying pan (do it in small batches if it is too cosy). Fry for a few minutes on each side until browned and crispy.

Whilst they are cooking make the meatball sauce. Melt butter in another frying pan on low to medium heat. Once melted add the flour and whisk until a roux forms.

Add the vegetable stock and whisk until there are no lumps. Let simmer for a couple of minutes and then add the Worcestershire sauce, soy sauce, cream, salt and pepper.

Taste and season with extra salt and pepper if needed. If the sauce is too thick, add some water to thin it out. Add the meatballs to the sauce, toss and serve immediately.

What to serve with these vegan Swedish meatballs:

As always if you make these vegan Swedish meatballs be sure to leave me a comment, rate this recipe and tag me on Instagram. I love seeing all your photos of my recipe recreations!

Serve as they are or with mashed potato (my favourite) or pasta!

Make sure you buy a vegan worcestershire sauce as this is traditionally made with anchovies.

Did you make this recipe? 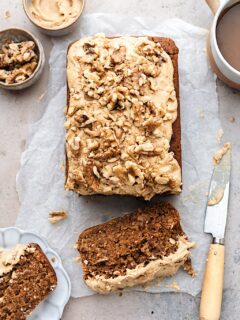 Next
Coffee and Walnut Cake
Click here to cancel reply.

Sorry why are they called Meatballs when they clearly contain no meat?

@Tamsin, as a 7 year vegan, I find using the word meat when describing vegan alternatives highly offensive. I have written numerous emails to manufacturers not to describe items like burgers but call them vegan patties, for example. But no luck yet . I have a long battle ahead of me but I'll get there in the end.

Hi, I'm Tamsin! At Cupful of Kale you'll find mostly healthy, always vegan and easy to follow recipes! There are sweet and savoury recipes for every occasion and craving!